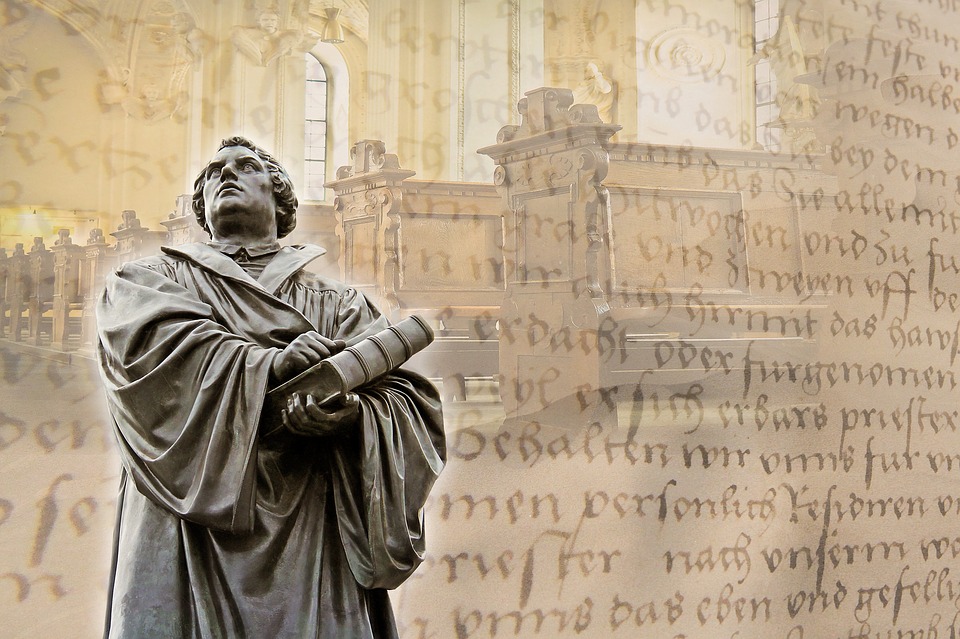 Remembering, commemorating and romanticising the Reformation

You will undoubtedly see many a post this month, and probably have seen this year about how important the Reformation was in history. But in this post I would like to offer a warning about romanticising the past, as well as the exciting opportunities and lessons it can give us.

Before we really get going, I feel a brief word about the Reformation is necessary. It was a movement in the late medieval/early modern period of history, mostly in the 16th century, although reverberations continued well into the next. It saw the likes of Martin Luther, John Calvin, Ulrich Zwingli and other ‘Reformers’ lead the split from the Catholic Church. Luther famously nailed his 95 theses on a church door, each point showing the wrongdoings of the Catholic Church. It was a time which would see the establishment of the Church of England, the dissolution of the monasteries, as well as bibles being written in common languages, and where God was shown to be a personal God, not a distant one, shrouded in mystery, approachable only through a priest or a ‘Saint’.

The ‘darker side’ of the Reformation

There are many paintings, many lectures, and many stories about the lives of the Reformation brethren. All these include their heroic deeds, the amazing and humble lives they led, and how positive the Reformation was. I’ve read articles on how we should tell our children about them, most fascinating I must say, but there is a danger in this. We romanticise the past, maybe this is because of the Victorian approach to history (Hobsbawm’s Invention of tradition comes to mind) but it should stop. Below are a few reasons why it was not so black and white:

So what did the Reformation give us?

These are just a few things that show a darker side to the reformation. Nonetheless, despite all of this, the effects of the Reformation were, and still are, amazing; it paved the way for free thought and free press. Sometimes we talk about the spiritual awakening brought by the Reformation, and of course that was tremendous. But when we talk to our non-Christian friends and they talk about history, what do we say to them? God brought light to Europe? He sent his Spirit? Arguments that will never hold up in the present day, because people do not believe in God. We know what God has done, but in an age of evidence and argument, we need to show what God has done; cold hard facts.

So what did come out of the Reformation? Free thought and press would alone give vent to many scientific discoveries and political discussions.   New theories, new theological ideas all came from the Reformation, finally ‘religion’ could no longer control people as it had. It gave a voice to the common person; it allowed them to engage in national debates.

The Reformation would lead to us being able to read, to write, to engage with discussions around us. Now some people take this as people before didn’t know what was going on in their country and what not, and that is wrong. But the Reformation allowed a stronger sense of identity, and protest. It allowed people to read, it would allow people like you and me to actually have an education.

The Reformation quickened superstition’s death. Although witch trials did increase, it did allow eventually for superstition to decrease. And whilst superstition is still around today, ‘touch wood’ and all that; it is nothing like what it was like in the medieval period.

The Reformation induced free trade, and gave way to a bigger and more powerful middle-class. Now, you could be a Marxist or a socialist reading this and think this was more a negative, and to be honest, I do see your point. But what we see is people that were once disregarded in society, elevated to positions such as Parliament, and perhaps giving us greater social mobility, even if it was still very limited. It saw the begins of a capitalist system, which has indeed given us benefits, and even if you are a Marxist reading this, then it is one step closer to communism/socialism!

The Reformation showed us that people can stand up to authority and win. It shows us that we can stand up as the smaller guy and win; it shows us that if there is something you believe in, fight for it, and don’t give up. It gave us people, even if you don’t have a faith, to look at and admire for their bravery. If you are a Christian, then it shows us that anything is possible with God, if he is with us, what can stand against? For the Christian, it put the ‘church’ back in its place, and emphasised a personal relationship with God through Christ, instead of some weird distant god through priests, bishops, indulgences and purgatory. Instead of a wealthy domineering powerbase, the Reformation turned back to the original meaning of ‘church’ in the Bible: ‘congregation’ or ‘assembly of believers’.

And where did all this come from? The Bible, that great book, finally translated into the common languages of the European peoples. The greatest thing the Reformation gave anyone was the Bible finally in their own language.

In fact, the entirety of today’s society is built on the back of the Reformation, on the back of the Bible. Yes, it wasn’t pretty and it wasn’t a picturesque time by any stretch of the imagination, but it gave us things we value so much. The society we live in now comes from the Reformation, and that we can be thankful for that. The fact is, no period in time is lovely, it is all gritty and scary, and that is something Christians need to remember. When we teach our children about it, we have to ensure a balanced approach. Romanticising the past is dangerous, it can lead to misconceptions, and can lead us to living in the past, or our own idealised fantasy world. It can lead us to forgetting the awful things that were done. At the same time, it is an event to celebrate, but always do it in balance.