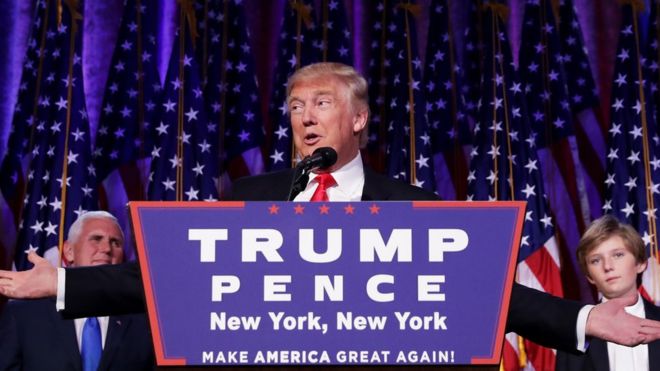 Reflection on the US Election: no need to worry!

It has been a week since the people of America democratically voted in Donald Trump to become their 45th President of the United States.  Was I disappointed?  Undoubtedly!  Did I panic? No!  In this short blog post I aim to show you that there is no need to worry about such things!

Once the news broke, social media seem to almost explode. People were posting that it was the end of the world; that anyone who voted Trump was a bigot, a racist, sexist etc.…and hate and snobbery were unleashed in one massive go.  It was crazy, Christians and non-Christians were panicking, were making assumptions of people they had never met and were frankly terrified.  Now, rather than being all high and mighty about your political stand point, take time to listen to others, tackle the issue from their stand point.  Trump may not be my chosen candidate, but there is no need to worry.

So why do we not need to worry? Well I heard a sermon on that talked a bit about this recently.  The answer is quite straight forward.  As Christians, we do not need to fear or worry because God is sovereign.  He is a far bigger power than any president.  Sometimes in life we wonder why things don’t go our way or feel overcome by the difficulties in life.  But remember God is bigger than any of those problems.  Maybe he is using them to rebuild you as a better follower of Jesus, to trust him more, to grow in all of his ways.  God cannot be shocked, he knew Trump would be president; he is in and out of time!  He knows what will happen, so give your worry to him, rest in him. He says countless times in the Bible ‘Do not Fear’, we have nothing to fear if we are one of his children!  Those words were important for the early church and they are important today in political uncertainty.  And if you were a Clinton supporter then do not worry that even Christians voted for Trump.  They have their reasons, do not be so quick to judge, but know that God is above all of them!

We do not need to worry because we can make an impact on society by loving our neighbour. For some reason, we feel that only the big politicians can change society, that they can make all things good.  We put way to much trust into a single politician.  If you liked Obama, well he had problems, if you supported Clinton; she had a load of problems, just as many as Trump does.  Putting our entire trust and faith in politics is dangerous and messy.  As Christians, we can make a difference by spreading the word, by living out the word and by showing love.  No not a wishy washy kind of love, by a love that wants to see the poor and needy helped, a love that reaches to those who we disagree with, a love that keeps us balanced, and a love that shines for all to see.  So before you start ranting on Facebook or social media, take a step back, look to God, know that he is in control, that you have nothing to fear, not even death.  So start listening to those around you, whoever they may be; do not be so quick to judge, take time to understand even if they do not with you.

This is not just for politics. We need not worry about anything.  Of course that is easier said than done, and we are but human, but when worry and troubles find you, take a step back and know God is sovereign over all.  Whether this is with school work, essays, stress at work, family troubles, remember that all things work together for our good, and that Jesus is with you every step of the way.

For us, our focus point should always be Jesus and the cross. When we get lost in the troubles of the world, look up to Jesus because he knows your pain and fear.   Our focus point is never a political ideology or secondary doctrinal issues.  Our focus is Jesus and only him.  So when the worries of this world take their hold, remember Jesus and just how awesome he is.

I was just about to post, when this song by Chris Tomlin came to mind, so let me end with it, ‘Fear not’.  Rather apt no?

In Christ, and in love

Politics
#Encouragement, #ideology
Previous Post
Why the Charismatic Church and the Reformed Church need each other!
Next Post
What is Christian Socialism? Have Christians always been Socialists?