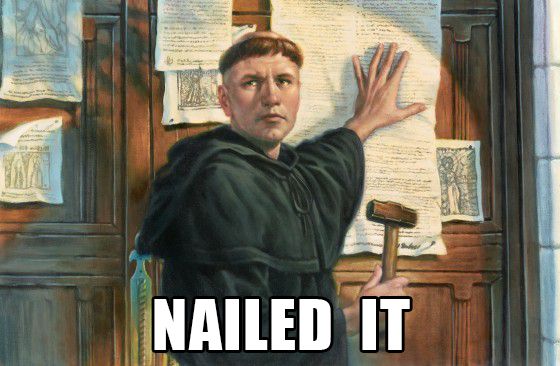 The Reformation: what were the consequences?

Happy Reformation Day everyone! What was the Reformation you ask?  Well it was when the Protestant church broke away from the Catholic Church, all starting with Martin Luther on the 31st October with his 95 theses which he nailed to a church door.  This along with the thoughts and ideas of other theologians were spread across the continents thanks to the recent invention in a printing press.  It was a movement that shocked the western world and made us who we are today.  In this brief post I want to state a few facts as to what the reformation achieved both good and bad!

The Reformation was and is a marvellous time for Protestants, God worked through it and brought the word to people like you and me. This doesn’t mean we should ignore the problems it did create because of mankind’s sin.  Total war saw hundreds of thousands perish, whole cities destroyed, because of a desire to control people.  So when we think on Reformation Day, be grateful to God for what he has done, for shinning the light, whilst remembering all those who died in a conflict that was born of sin.

It is a great period to study and 600 odd words won’t do it justice, but hopefully this has given you a brief insight!

History
#Reformation
Previous Post
Make-up – to wear or not to wear?
Next Post
October the thirty-first: ghoulish grins or revolutionary rants?