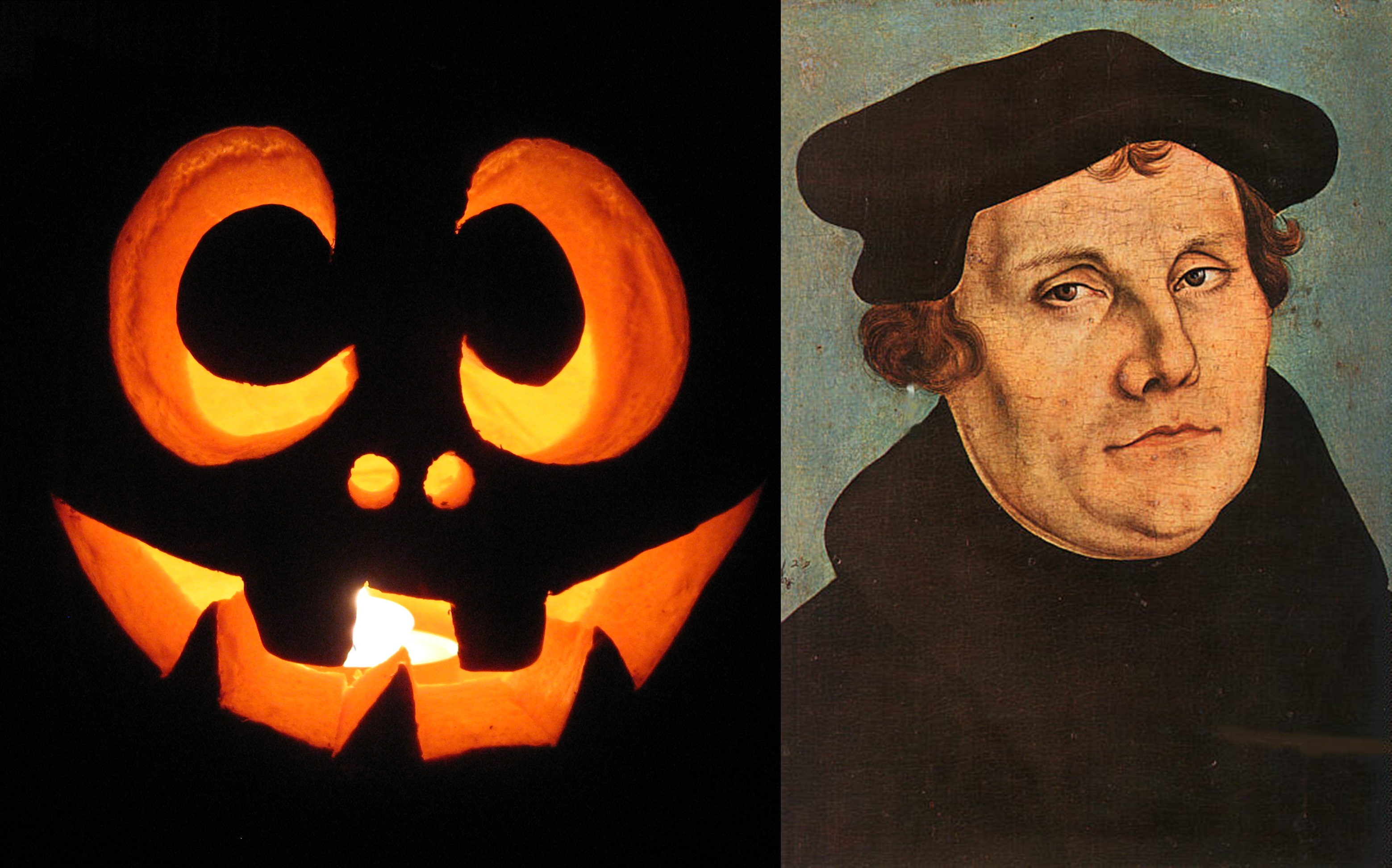 The 31st of October is a day of historical significance for the Christian; although it is generally associated with Hallowe’en and all the gruesome fancy-dress parties and pumpkin-chiselling accompanying it. Then there’s the hideous figures frightening the life out of you with their screeches whilst you’re buying your sprouts from the supermarket.
That aside, today is also the 499th year since a random monk nailed a bit of paper to a church door in Wittenberg, Germany. Every year it is celebrated as ‘Reformation Day.’

On that bit of paper, the monk Martin Luther wrote a wordy rant against corruptions in the Catholic Church that has had lasting affects to this day, now referred to as ‘The Ninety-Five Theses’. It mostly consisted of attacks on the Church’s practice of taking money for indulgences. The saying of Tetzel characterises this practice that Luther contested: “The moment a coin in the coffer rings, the soul from purgatory springs.”

Martin Luther was an Augustinian monk disgruntled by the state of the Church around him, fuelling these notions was his discovery of the Bible for himself.

This event is significant, as it is widely regarded as signalling the start of the Reformation, a period of dramatic spiritual change; although seeds had been sown previously and a change was very much in the wind already. Everybody would be affected, kings, Popes, bishops, peasants, knights – the lot.

Europe in 1517 was very much still in the dark ages, superstition reigned supreme. The Church, led by the Pope, had fallen into a state of disarray, despite the valiant efforts and prayers of men like Girolamo Savonarola, John Wycliffe and John Huss. The clergy was in a lamentable state. Whilst the printing press had been invented the century before, the Bible had not been fully translated into common languages for the masses. Church services largely consisted of incomprehensible Latin chants.

In pre-Reformation Britain, the average Joe was illiterate, lived in relative poverty, threatened by disease and plague with an average life expectancy of 38 years; thirty per cent of children died before the age of ten.

The reaction to Luther’s Ninety-Five Theses was one of outrage. He was summoned to Rome and labelled a heretic. Theologians wrote whole treatises refuting Luther’s work. The situation started to get out of hand and violent, when university students burnt copies of Luther’s work. Opposition grew. Others joined Luther’s side.

Luther and the reformers stood up to this opposition with great fervour. Luther himself is forever famous for his bold words some time later, after refusing to recant his writings: “Unless I am convinced by proofs from Scriptures or by plain and clear reasons and arguments, I can and will not retract, for it is neither safe nor wise to do anything against conscience. Here I stand. I can do no other. So help me God.”

One of Luther’s primary contributions to this great revival of God was his translation of the Bible into German. Men such as William Tyndale followed suit, translating the immortal Word of God into their own native tongue. For me, this is the most important thing the Reformation has given us, and we bear the fruits to this day.

The end-result, with the two sides, refusing to back down and thereby irreconcilable, was a split from the Catholic Church, creating the Protestant Church. Over the next few years Europe battled it out, physically and spiritually.

First and foremost we have to acknowledge the hand of God working events. He used the divorce of King Henry VIII of England to split the English church from Rome. He used a portly middle-aged German monk to light a spark. The Lord moves in mysterious ways His wonders to perform!

The Bible enlightened the minds of the man on the street, fulfilling William Tyndale’s vision of, “a ploughboy knowing more of the Scriptures than a priest.” With the precious Gospel of Christ and the Biblical values of devotion to God, obedience to the king and diligence in service, Protestant nations prospered.

Whilst the world views Hallowe’en as of more importance than Reformation Day; we can always remember the day when the Lord brought light into our dark continent. Let’s not look down on the idle parties and smugly think we’re so much better, let’s pray that the Lord will bring us another Gospel Reformation! Oh, how we need it!

Contemporary issues / History
#Hallowe'en, #Reformation
Previous Post
The Reformation: what were the consequences?
Next Post
Sennacherib’s downfall and Bible authenticity